Getting the correct input into RPS

In a first article about the Restore Point Simulator (RPS) I talked about the history of RPS and why it was created. I want to take the time now to explain the correct input parameters. Although I added some tool-tips in 0.3.1, people are sometimes confused how it all ties together.

TL;DR? The RPS GUI maps quite directly to the Veeam interface, check the screenshots to see how, if you already understand how Veeam works.

For those that didn't read the previous article, I'll repeat the formula here which we use at Veeam to do rough estimations. Why? Because RPS is directly based on it:


Backup size = C * (F*Data + R*D*Data)
Data = sum of processed VMs size by the specific job (actually used, not provisioned)
C = average compression/dedupe ratio (depends on too many factors, compression and dedupe can be very high, but we use 50% - worst case)
F = number of full backups in retention policy (1, unless backup mode with periodic fulls is used)
R = number of rollbacks (or increments) according to retention policy (14 by default)
D = average amount of VM disk changes between cycles in percent (we use 10% right now, but will change it to 5% in v5 based on feedback... reportedly for most VMs it is just 1-2%, but active Exchange and SQL can be up to 10-20% due to transaction logs activity - so 5% seems to be good average)

This formula and RPS have 3 parameters in common. Data would be the first one and it maps to "Used Size GB". To give you and example, if you would have a VM with one VMDK, the used size would be the amount of blocks the VM has already written to. So for example if you would have a thick provisioned VMDK of 50GB but you only use 20GB inside the guest, the used size would be around 20GB. A more correct definition would be what the VM is actually using when it would be thin provisioned. Because Veeam backs up at the block level, a thin provisioned disk would be exactly what Veeam needs to process during a full backup (and some meta data).

D or delta is the amount of data that changes between backups. In RPS the parameter is called change rate. This is dependent on 2 parameters. First of all the frequency of backups which is in most companies "daily". Secondly the application. Don't put this parameter to low. Veeam backups up at the block level. A small update, can flag a bigger block on the VMDK level than you estimated. If you fill up a disk sequentially like a file server, you won't notice this  so much because 10 sequential changes could be only flagging 1 block. However, if you are doing a lot of small random I/O on various locations, the number can quickly rise. So from my experience,  a number of 5% changes is fairly optimistic while 10% is rather conservative. I personally prefer a more conservative approach.

Finally C or compression which is called "Data left after reduction". I have had tons of people discussing this parameter with me because you can interpret this one in various ways. However look at the formula and it will all make sense. The formula basically says:

If you want to disable compression, put data reduction to 100%.

In the formula there are 2 parameters left, F & R. Like discussed in the previous article, these one are hard to calculate, and that is exactly what RPS does for you. So for retention points, you should just define your policy. If you need 14 daily restore points, put in 14 for "Retention points" and daily for "Interval". You will see that in some case, you might end up with more restore points than you configured. This can be normal as Veeam considers your retention policy but also dependencies between Fulls and Incrementals. So don't try to adjust the retention points because you feel it miscalculated, instead take a look at the example given in previous blog article.

What also influences the amount of parameters is the style parameter. This actually maps directly to Veeam GUI.  For example, "Backup Copy Job" (BCJ) should be quite easy to understand. It refers directly to a Backup Copy Job . Selecting should it should also show you BCJ specific configurations

For the other "styles" called Incremental and Reverse, the other setting map mainly to the advanced settings of a regular job except for "Retention Points"

If you selected Incremental without any active fulls or synthetic fulls, you would get a forever incremental job. It also maps directly to the GUI but more specifically to the advanced settings of a regular job. Granted, the checkboxes are under the buttons "Days" and "Months". Also there is no global "enable" checkbox for synthetic or active but do understand that checking one of the boxes enables "Active" or "Synthetic". Finally "Monthly" has preference over "Weekly". In the Veeam GUI, you can selected only one, here you can enable checkbox for both but weekly will be ignored when you enabled one Month.

So if you want a weekly synthetic backup, it would be like shown below. I did not implement "Transform", and with good reason. Until the day of today, I have received 0 requests for it. 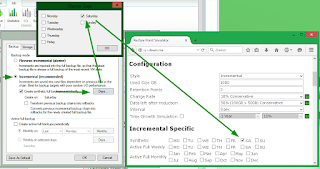 A Monthly Active Backup would like shown below. Important here is to know this does not defines GFS policies. Those can only be defined in a Backup Copy Job. I once had a guy that checked only January because he want to have a "yearly full backup for archiving". He was quite surprised by the result. Basically you just told the engine that you want to have a yearly chain which only get resets in January. 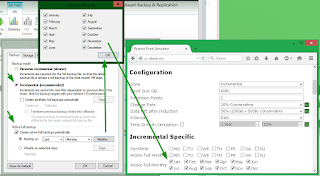 Finally "Reverse" incremental, can be found in the same place. 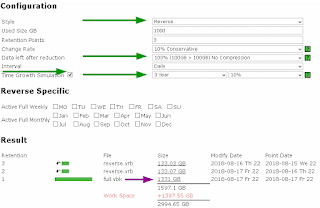 The differences are small in regular jobs but once you go GFS, the time growth calculation can have a dramatic impact which is hard to calculate with excel. 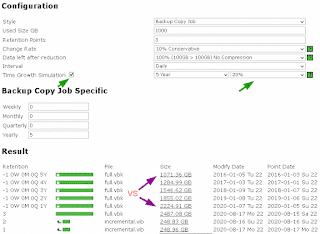 With this, I have discussed all parameters. Some might ask, what about "Quick Presets", what does that do? Well they are just quickly preconfigured scenario's that you can use. For example, if you want to have a monthly active backup, you can click all 12 select boxes or you can just select the matching style + monthly active full to quickly configure this scenario 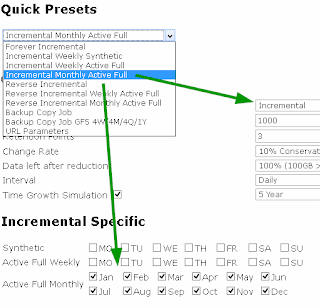 If you made it this far, thanks for reading and enjoy playing with RPS.
Posted by Timothy Dewin at 6:02 PM