With the release of v8 a new backup method has been introduced, called forever incremental. Not a lot of fuzz around it but still a nice feature:
What is important is that there is still random I/O, if some job is merging and another on is still in the backup process, the later one might be impacted if you are backing up to the same spindles. Still the I/O penalty is lower (3 vs 2 I/O's).

So how do you configure it? Well you just select incremental mode and disable any synthetic or active full backups like so. If you would do this in v7, the GUI will complain you are not doing any full backups, in v8 it will switch to forever incremental 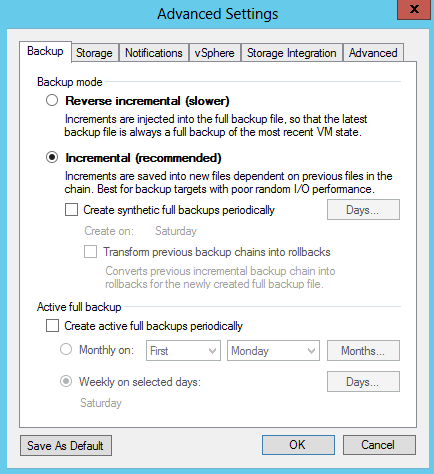 There are some good reasons why you want to do an active full every month or every 2 months. First of all corruption. However, with Veeam, it is highly recommended to use Surebackup to execute recovery tests. In v7, a new option has been added to verify all the blocks (or the complete backup file). You can find this option, in the settings tab of of the Surebackup job. When in doubt, check the manual

If you do not run Surebackup, in v7 a manual tool was introduced "Veeam.Backup.Validator.exe". You can read more about it on Luca's blog

In v8 this tool has been extended so you can run it on backups that are not even imported in B&R. Also you can output the report to an XML file, which should allow you to script around it. For example:

Then with powershell, it is really easy to read out the values. Maybe the parameters might be a bit more difficult but here is an example.

Watch out, I tried to run the example via the powershell_ise, and the validator didn't spit out correct result. Running it manually seems to work. Also the validator seems to only check the last restore point. Instead of specifying the VBM file you can also specify the VBK file so the check will be done on this specific file. 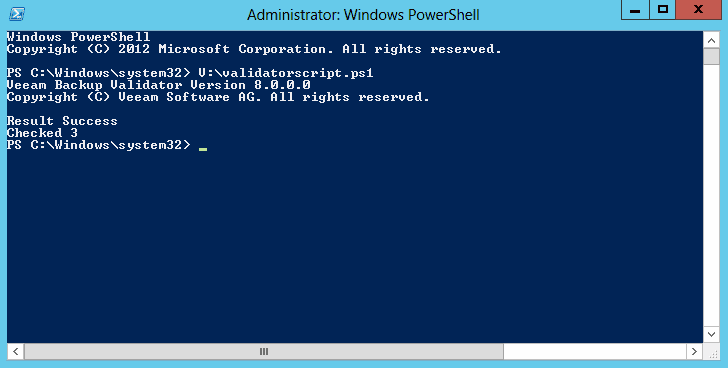 Ok so validation (or healtcheck like it is called for a backup copy job) is not an issue. Apparently fragmentation of the backup file has been enhanced greatly as well in v8. However there is one thing you can not do in Windows, and that is shrinks files. Imagine you backup 10 VM's today but in a couple of weeks, after a migration, 2 VM's are being deleted. You might have archived them so they are no longer in production and thus are not being backed up anymore. Well the unique blocks of the VM's are being marked as deleted but the VBK file will never become smaller. When Veeam needs to store or inject more data, it will try to reuse those "blocks" or "empty space", but the file never shrinks. For a backup copy job, a method call "compacting" was introduced. It recreates the VBK file and skips empty blocks. However this methos is not (yet?) available for a normal backup job. Thus the only way to accomplish is this is to do an active full.

However, like discussed, if you enable active full in the scheduler, the backup job will switch back to the v7 forward incremental style and will not merge anything. The solution? Run an active full once in a while manually, or create a small powershell script. the script itself can be rather small like:

You could schedule this for example every 2 months. If you need help scheduling, check out my previous blog post

However at this point, nothing is being deleted because the active full starts a new backup chain. So nothing will be deleted until this new chain has 3 retention points.

Posted by Timothy Dewin at 6:10 PM