Often I visit customers and ask them about there restore tests. Most common answer? We test the backups when we do the actual restores. To the question why not test more frequently, the most common answer would be "time and resources".

A couple of months ago, I actually visited a customer that tried to do a restore from backup. It failed, B&R was able to restore the backup but the data inside seemed to be corrupt. The SQL server refused to mount the database. Exploring multiple restore points, this gave the same issue. It was a strange issue because all backup files where consistent (no storage corruption), and the backup job did not have any failed states. The conclusion was Changed Block Tracking corruption. In light of the recent bugs in CBT, I wanted to emphasize again how critical it is to validate your backups. If the customer would have tested his backups with for example, the SQL test script included in v8 , they might have caught the error before the actual restore failed.

This shows another thing I want to highlight. Surebackup is a framework but your "verification" is only as good as your test. By default, Surebackup application tests are just portscans. This tells you that the service has started (it was able to bind to the port and it is answering), but doesn't tell you anything about how good the service is performing. For example, the SQL service / instance could start, but maybe some databases where not able to be mounted inside the instance.

Few people visit this topic, but you can actually extend the framework. The fact that is supports Powershell makes it quite simple to write more extensive test.

So here is a small test for Sharepoint. I hacked it together today, so please reread the whole script to "Surebackup" my coding skills. It is rather basic, but you could use it for any kind of webservice actually. It simply reads the content of a txt file in a certain site. If the content matches a predefined value, you know that
a) The database was mounted inside the instance
b) Sharepoint is able to talk to the instance and query it
c) The webservice is responding to requests

So how do you get started? Well first upload a txt file with some content. In my case, I uploaded file contesttest.txt with the content "sharepoint is working succesfully" as shown below: 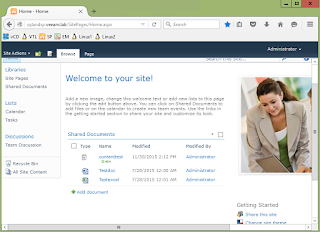 You can right click the link and copy it's location. Test if you can really access it this way as shown below

Now get the powershell goodness from https://github.com/tdewin/veeampowershell/blob/master/suresharepoint.ps1 and put it somewhere on the backup server. Now edit the file.

First of all you can see that everything can be passed as a parameter (e.g. commandline call, use -server "ip" to change the ip address). Change the username and plaintext password to the user that will be used to authenticate against sharepoint. Preferably and account with read only rights and not the administrator as in my screenshot, this way you are sure it doesn't break anything ;).

You might wonder, do I need to provide the password in plaintext? No you don't have to actually, you can also follow this procedure but it might make things more complex. Instead of plaintext passwords, you can use Powershell encrypted passwords but understand that if you want to decrypt the password, you need to be the same user as the one that encrypted the password (the whole point of encrypting it, right?). When Surebackup runs, it is actually being ran by the backup service. So the account that is being used to decrypt the password is the service account used to run this service (as shown in the screenshot below) 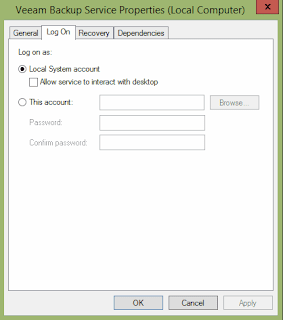 If you go this far (or you skipped the whole password encryption part because your backup server is a Fort Knox anyway), we can now configure the script. Go to Veeam B&R and configure the test script as shown below in the application group (or in the linked jobs part): 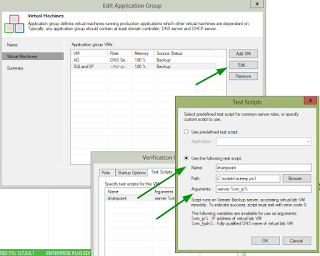 Notice that I also configured "Arguments" as "-server %vm_ip%". This will pass the sandbox IP to the script directly.

Now if everything is green and you got a match, run Surebackup, and validate if you can get the same output in your lab 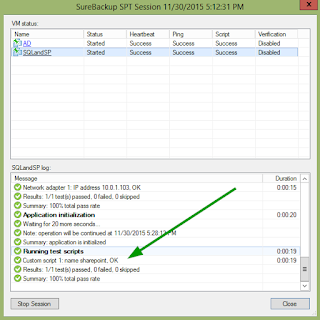 If it failed, you can actually check the logs for the output the script gave. Go to "%programdata%\Veeam\Backup\". It should contain a folder with your

This should give you the output of the console. In this case, everything was ok!
Posted by Timothy Dewin at 5:50 PM